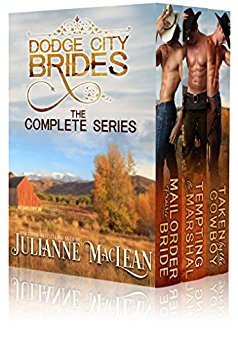 Briggs Brigman has been burned once before, and the last thing he needs is a beautiful wife who will spend hours in front of the mirror, primping herself. He knows how hard the prairie can be on a woman, and all he wants is a stalwart bride who won’t complain about hauling water from the creek….

Sarah MacFarland is a city girl with no idea what she’s in for. All she wants is to escape her fearful life in Boston and start fresh with a new identity. Answering an advertisement for a mail order bride seems like the perfect solution, until she meets her soon-to-be husband—a ruggedly handsome, strapping farmer who leaves her breathless on their wedding night. But is it possible that two tormented souls can find happiness, when all they know is betrayal, and when trust is the only way out of a tumultuous past that simply won’t stay buried?

Disguised as a man, Josephine O’Malley strolls into a Dodge City mercantile with one thing on her mind: to even the score with the man who murdered her husband. What she doesn’t count on is Fletcher Collins—the handsome and irresistible new marshal in town—bursting through the doors of the mercantile with guns blazing…and a plan to stop her from pulling the trigger.

There’s a new marshal in town, but he’s fighting inner demons of his own. Fletcher Collins is a man who has known his share of heartache, and when he finds himself apprehending a gorgeous widow for murder, he begins to re-evaluate what it means to be a lawman. But if Fletcher is going to keep the widow out of prison—and figure out what’s really going on in Dodge—he’s going to have to learn how to follow his gut. Unfortunately his gut is telling him that Josephine O’Malley is exactly the kind of woman who could make him break all the rules…

TAKEN BY THE COWBOY

Former bounty hunter, expert gunslinger, and the toughest sheriff Dodge City has ever known, Truman Wade is a real man from the tip of his black Stetson right down to his spurs and leather boots. He’s never met his match in a gunfight, but he’s never met a gorgeous, gutsy woman from the twenty-first century either…

Newly single after a rocky breakup with her self-absorbed fiancé, newspaper columnist Jessica Delaney crashes her car in a lightning storm and soon finds herself dodging bullets in the Wild West. Before the night is out, she’s tossed in jail for a murder she didn’t commit, and if things don’t seem complicated enough, the impossibly handsome sheriff in charge of her arrest has danger written all over him – and a sexy swagger to die for. Jessica knows she needs to get home, but when Sheriff Wade’s enticing touch sets her passions on fire, she begins to wonder if fate has other plans for her, and soon she must choose between the life she longs for in the future… and the greatest love she’s ever known.