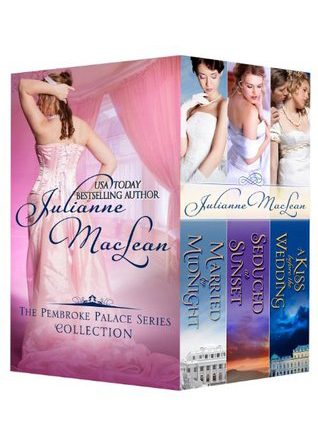 MARRIED BY MIDNIGHT
For seven years, Lord Garrett Sinclair– the ruggedly handsome illegitimate son of the Duke of Pembroke–has been traveling abroad with no intention of ever returning home to Pembroke Palace… until his father commands that he must marry by Christmas in order to thwart a family curse or lose his inheritance forever. Haunted by a tragic accident that has hardened his soul, Garrett entrusts his brothers to seek out a bride who will agree to a marriage in name only. Her reward? A sizable share of his inheritance–payable immediately after the wedding night….
Lady Anne Douglas has been ruined by scandal and disowned by her father. Facing a life of poverty and spinsterhood, she leaps at the generous terms of the marriage contract to ensure her independence. But the charade of a two-week engagement proves more of a challenge than either anticipated when they cannot resist the intoxicating lure of the marriage bed. Anne knows they will part ways after the wedding. Will she dare risk her heart for two weeks of pleasure in the arms of an irresistible rogue? Or will her surrender become her undoing after a most unexpected turn of events mere hours before the wedding?

A KISS BEFORE THE WEDDING – A Pembroke Palace Short Story
Lady Adelaide is engaged to be married to a duke, but sometimes the heart creates a new destiny…
Lady Adelaide Robins, the charming and beautiful daughter of an impoverished earl, was raised on the foggy moors of Yorkshire. Never in her wildest dreams did she imagine she would travel to London, capture the heart of a duke, and receive a proposal of marriage. Is she ready for a life of luxury and privilege as a duchess? Or will her heart forever belong to another? William Thomas, the second son of a Yorkshire viscount, is about to be disowned for his unbecoming ambitions to become a medical doctor. But what does it matter if he can have the woman he loves at his side? Determined to finally claim the hand of Lady Adelaide, his lifelong beloved, William is shocked to discover that she has accepted a marriage proposal from a duke. With the wedding only days away, will he be able to win back her heart?

SEDUCED AT SUNSET
Sometimes the matchmaker finds a love of her own…
Lady Charlotte Sinclair has long given up her dreams of happily ever after. Years ago, a tragic accident claimed the life of her beloved fiancé, but somehow she found the strength to go on–as an independent woman with a secret double life that has earned her millions. Lately, however, she has begun to yearn for something more… While setting out to play matchmaker for her mother, Lady Charlotte meets a rugged, handsome stranger who saves her from a thief in the street, but her heroic rescuer soon turns out to be more mysterious–and dangerously captivating–than any man she has ever known. Swept away by passion into a sizzling summer affair with a man who leads a double life of his own, she vows to live only for pleasure with no promises of tomorrow. But soon she must accept that one final night of ecstasy with an irresistible lover is never going to be enough…