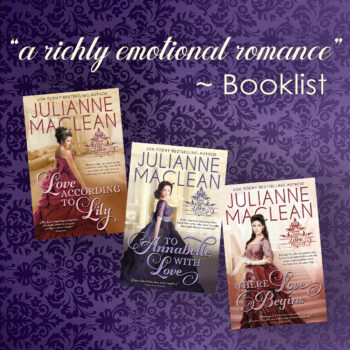 You can read the books out of order if you like (each book stands on its own) but if you want to follow the trilogy as I wrote it, you might want to begin with LOVE ACCORDING TO LILY.

Return to the glittering world of Julianne MacLean’s popular American Heiress Trilogy with this romantic, emotionally powerful spin-off series—Can This Be Love

Being raised in a strict, humorless household did nothing to dampen Lady Lily Langdon’s wildly romantic nature — nor cool her lifelong affection for Edward Wallis, Earl of Whitby, her elder brother’s oldest, dearest friend. But Edward cannot see the lovely woman she’s become for the young schoolgirl she once was. So, with lessons in flirtation from her American sister-in-law, Duchess Sophia, Lily means to open Edward’s eyes and win his heart.

But just when her seduction begins to take hold, a shocking twist of fate forces Edward to take stock of the reckless life he has lived. Flirtation with his best friend’s younger sister is the last thing he wants, but Lily cannot give up the dream of rapture that surely awaits her, if only she can prove to the handsome, haunted earl that it is never too late to fall in love.

“It takes a talented author to segue from a lighthearted tale of seduction to an emotionally powerful romance that plays on your heartstrings…a very special, powerful read.” – Romantic Times Book Reviews