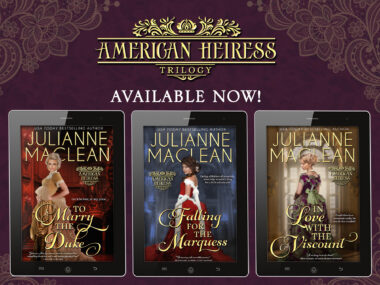 I recommend starting with the first book in the trilogy, TO MARRY THE DUKE, which was originally published by Avon in 2003 and was a Romance Writer’s of American Rita Finalist.

The second book in the trilogy, FALLING FOR THE MARQUESS, was a USA Today bestseller in 2004 (under the title An Affair Most Wicked), and features a complex hero who is not the marrying kind, so the heroine has her work cut out for her. The third book, IN LOVE WITH THE VISCOUNT, was originally released under the title My Own Private Hero. I admit I had a difficult time writing that book because of a challenging love triangle, and I wasn’t completely confident about it at the time, but to my surprise, when I re-read it this summer, it was my favorite of the three. (I feel funny saying that because authors usually don’t like to admit which books are their favorites. It’s like admitting out loud which one of your children is your favorite.)

You can read the books out of order if you like (each book stands on its own) but if you want to follow the trilogy as I wrote it, you might want to begin with TO MARRY THE DUKE.