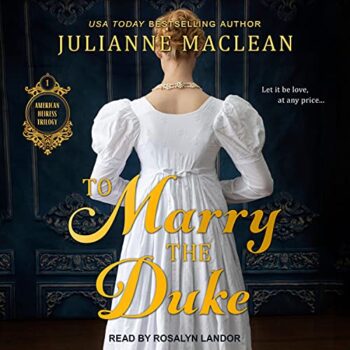 I’m thrilled to let you know that To Marry the Duke has finally been released in audio. I feel like I waited for this day forever, because this novel was my first “single title” historical romance, originally published by Avon/Harper Collins in 2003. At the time, I had been reading about real life American heiresses like Consuelo Vanderbilt and Jennie Jerome (Winston Churchill’s mother), and I couldn’t let go of the burning desire to write a story about a woman who was pressured to travel to England to marry into the British aristocracy.

My original working title for the book was An American Heiress in London, but Avon suggested a different title: To Marry the Duke, because they believed that books with “Duke” in the title sold well. They were right about that, and it’s still true today!

Below, on the left, is a look at the original cover art from the 2003 print edition. At the time, no audiobook edition was ever created, so the audio rights eventually reverted to me. In 2020, I went after the remaining publishing rights for all my Avon titles, and then I was free to reissue new ebook and print editions (see the new cover art below, on the right).

Finally, in early 2021, Tantor Media stepped in to acquire audio publication rights, and they hit the ball out of the park by securing my dream narrator, Rosalyn Landor (!!). I danced around my office when I found out they got her.

For those of you who listen to audio books, you might recognize Rosalyn’s voice and incredible talent from Julia Quinn’s Bridgerton series, and many of Lisa Kleypas’s historical romances, and also from my recent novel A Fire Sparkling. I love her so much as a narrator that I’m thinking about making the main character in my next book British – just so that I can request her for the audiobook!

Learn more about the audio edition of To Marry the Duke at: