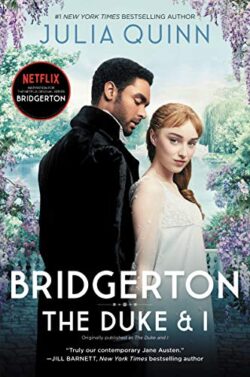 If you’ve burned through Julia Quinn’s fabulous Bridgerton series and want to read more historical romance, you’ve come to the right place! I’ve been reading in the historical romance genre for decades, and I thought I would recommend some of my favorite authors who write books set in the Regency and Victorian era. Here are some cool suggestions for you:

Four young ladies at the side of the ballroom make a pact to help each other find husbands . . . no matter what it takes.

Historical romance doesn’t get much better than this. Start with book one: Secrets of a Summer Night

Michelle McMaster writes about dashing heroes and spunky heroines in her historical romances, and is known for humorous dialogue and memorable characters. Perfect for fans of Julia Quinn. Start with book one: Seducing the Bride

I’m a huge fan of Laura Lee Guhrke and can’t possibly write a blog about historical romance without including her. I had a hard time choosing which series to recommend because they’re all terrific, so I went with this one which is an editor’s pick at Amazon for best historical romance. Start with book one: The Truth About Love and Dukes

Meet the Bedwyns…six brothers and sisters—men and women of passion and privilege, daring and sensuality…Enter their dazzling world of high society and breathtaking seduction…where each will seek love, fight temptation, and court scandal…

Mary Balogh is a gifted historical romance novelist and I can’t say enough about her talent. Start with book one: Slightly Married

It would be professionally irresponsible of me not to recommend one of my own historical romance series. This one is set in the lavish palace of an English duke, where duty and desire collide. ReadertoReader.com says: “Enthralling, passionate, and suspenseful until the very last page is turned…” Start with book one: In My Wildest Fantasies

“…all the romance, struggle and drama one could expect from a Jane Austen book!” ~ Bookblogger VanyaDrum

Read about five young women whose devoted friendship sustained them through the hardships of childhood at a harsh charity school. Now employed as governesses, they care for other people’s children, never expecting to know the blessing of loving marriages and families of their own. But when the ladies encounter five special gentlemen, these humble governesses might just become Cinderella brides. Start with book one: The Nobelman’s Governess Bride

Bestselling author Cathy Maxwell calls this “full-bodied romance…with intelligence and heart.” Eloisa James says: “Captivating characters and a romance that sizzles.” “Will leave you swooning,” says Sabrina Jeffries. Entertainment Weekly listed it as a book they’d love to see adapted after Bridgerton. Start with book one: The Bad Luck Bride

This one is unique on the list because it’s a Scottish romance set during the Regency era. “A grab you by the pants, hold on for the ride, stay up till 2am kind of book!” says an Amazon Reviewer. “Had me laughing out loud with the bantering between the H/H.” says AmyA. Start with book one: Lady Guinevere and the Rogue with a Brogue

“Christi Caldwell is a master of words and The Hellion is so descriptive and vibrant that she redefines high definition. Readers will be left panting, craving, and rooting for their favorite characters as unexpected lovers find their happy ending.” —RT Book Reviews. Christi Caldwell is wildly popular with seasoned historical romance readers. Start with book one: The Hellion

Anything by the late, great Jo Beverley

If we’re sticking with sexy Regency historicals, I highly recommend Jo’s The Company of Rogues series, which has 17 books to enjoy. (Her Mallorens & Friends series is positively spectacular, but it’s set during the Georgian period, if you don’t mind skipping backwards a few decades.) But I especially want to showcase one of her early hidden gems, a standalone traditional Regency romance called Emily and the Dark Angel, one of my all time favorite romances.

Tanya Anne Crosby is one of my favorite authors. The incredible Lisa Kleypas says she “writes remarkable love stories.”

RT Book Reviews says that “Tanya Anne Crosby weaves a hauntingly beautiful spell with the stroke of a master’s pen…” So true! Start with book one: Seduced by a Prince

“Mysterious, heartfelt, sensitive, and sensual…Two big thumbs up.”—Publishers Weekly
“When you’re reading a book that is a step or two—or six or seven—above the norm, you know it almost immediately…The characters here are so complex and so real that I was fascinated by their journey.”—All About Romance.

I love books with complex characters and Jennifer Ashley always delivers. Start with book one: The Madness of Lord Ian Mackenzie

From the ballrooms of London to the idyllic English countryside, fall in love one temptation at a time, and let the seduction begin. These titles are great if you’re looking quick, shorter reads. Start with book one: Stolen Kisses from the Viscount.

“Darcy Burke never disappoints, her storytelling is just so magical and filled with passion. You will just fall in love with the characters and the world she creates!”
– Teatime and Books

Start with book one, a prequel to the series which includes bonus scenes: The Bachelor Earl

To finish off, let’s take a little detour off the traditional Regency path and include an adventurous romance series with pirates, spies and smugglers. Here’s the tagline for book 2: “Notorious earl seeks lady outlaw for secret partnership. Courage required. Clothing optional.” If you love sinfully hot heroes, breathtaking adventure, and scorching romance, discover why readers are raving about Shelly Thacker. Start with book one: Escape with a Scoundrel

And continuing along the detour, if you’d like to shake things up and try a medieval romance, this series is a giant. It’s three generations of one family. It’s like Medieval Bridgerton. Tanya Anne Crosby says: “Kathryn Le Veque is a force of nature. Her stories are epic, with timeless themes and heroes to die for.” Jump into the deep end with The Wolfe.

I hope you enjoyed my list and find something here to keep you reading late into the night – until the next season of Bridgerton begins!