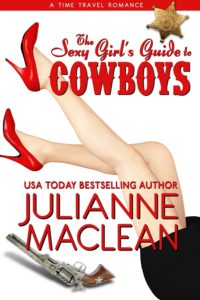 I am a traditionally published author of historical romance, and I have been building a loyal readership over a number of years, so when I decided to self-publish a slightly quirky time travel with a contemporary heroine, I wanted my readers to understand it was something different. I also thought I might like to experiment and try to reach new readers. I work with a professional designer, Kim Killion, and this is what we came up with.

I launched the book in June 2011 under the title THE SEXY GIRL’S GUIDE TO COWBOYS. It was unlike all of my previous covers, however, and it stuck out like a sore thumb on my website.

To make a long story short, the sales were not quite what I had hoped for, and I quickly realized that the majority of my long time readers were shying away from the book because it looked like chick lit. I had tossed the “cover continuity” rule out the window, changed my brand and alienated my readers, which meant I was starting from scratch to target a new and completely different readership.

I immediately asked Kim to design another cover that would be consistent with my historical brand, and I retitled the book to call it TAKEN BY THE COWBOY. Within a week, I had the new version uploaded. I was able to keep the same ISBN number, so all links to the old book page remained the same, and Amazon was helpful enough to send emails to everyone who already bought it – to let them know there was an updated edition. Smashwords was equally helpful. If anyone unwittingly tried to buy it twice, they would be informed that they had already bought it. 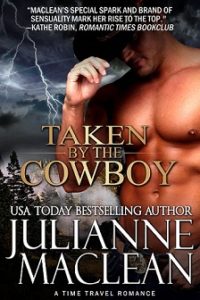 I also rewrote the back cover blurb to make it less chick-litty. Here is the original version: The West Was Never Wilder… What would you do if your car spun out of control and you woke up in the Wild West of 1881? Dressed in skinny jeans, sexy red pumps – and frustrated by a troublesome lack of cell phone reception – fitness columnist Jessica Delaney soon finds herself dodging bullets. Before the night is out, she’s thrown in jail for a murder she didn’t commit, and if things don’t seem complicated enough, the hot-looking sheriff in charge of her arrest has danger written all over him – and a sexy swagger to die for.

Jessica knows she needs to get home, but when ruggedly handsome Sheriff Truman Wade gives her a taste of the real Wild West, she begins to wonder… what’s her hurry?

The new version reads more like my other books. (You can read it here.) It focuses more on the alpha male hero and the emotional intensity of a deeper romance.

Even at the same price, the ranking immediately improved when I let my readers know about the new cover, so I believe it was the right move. It was a good lesson about the importance of author branding and cover continuity, and staying loyal to your devoted readers.

So tell me, which cover do you like better? If you’ve read the book, which do you think matches the tone of the story better?