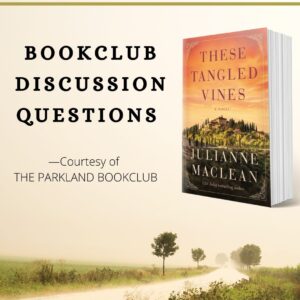 Many thanks to the generous members of The Parkland Bookclub for sharing their excellent discussion questions with me! Here they are. Enjoy!

2. Lillian chose Freddie to marry based on what she had observed in her own parents’ turbulent marriage.  Her mother had advised Lillian to “marry someone soft. The kind of man who wouldn’t hurt a flea.”  Was this marriage a mistake? If so what type of partner would have been better for Lillian?

3. Do you think Freddie’s writing career justified his behavior: taking off for the day until late at night, depending on Lillian for money, leaving for weeks at a time to Paris in the name of research?  What would have happened if Lillian had complained about this behavior?

4. Do you think Freddie was selfish by putting off having a family or was it just not the right time?  Do you think he was a good father to Fiona?

5. Why do you think Maria was so quick to befriend Fiona?

6. If Lillian had been able to marry Anton, how do you think Maurizio Wines would have changed?

7. Do you believe the car accident that paralyzed Freddie was really an accident?

8. Did you agree with Anton’s decision to keep his promise to Lillian? Was it driven by love or guilt?

10. How did Fiona win Sloane over? Do you think she could ever change Connor from his shallow, self -centered ways?

11. Was Freddie justified in keeping the fact that he knew Anton was Fiona’s father a secret and denying Fiona a relationship with Anton?

12. The region of Tuscany has captured the hearts of many writers and travelers.  Why does this area appeal to so many people?  What passage in the book really epitomizes the Tuscan flavor for you?

Purchase THESE TANGLED VINES for your Kindle.