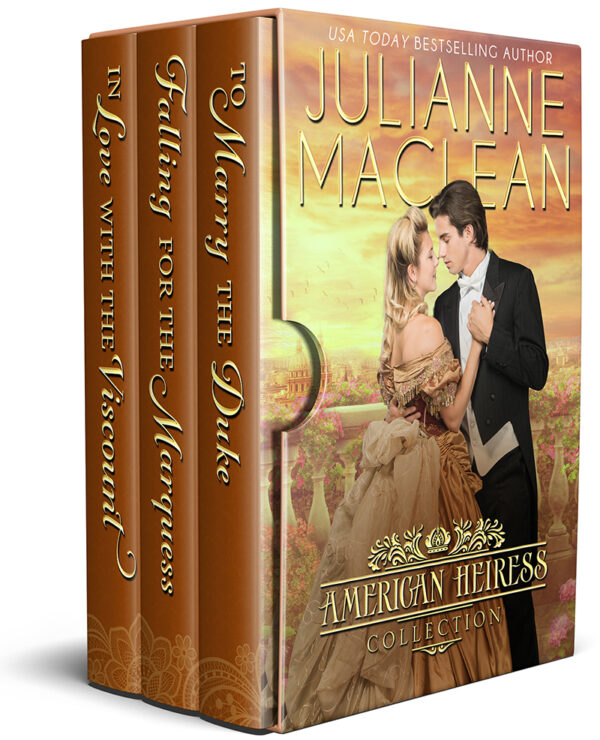 Wealthy American heiress Sophia Wilson wants to marry for love, but love is the last thing on James Langdon’s mind. The darkly handsome Duke of Wentworth needs funds for his crumbling estate in the north, and more importantly, he comes from a menacing past and has learned to avoid passion at all cost. But soon he and Sophia must choose between the marriage they thought they wanted and a fiery, passion-filled union that could change them forever. “Ravishing romance that will keep you turning pages until the wee hours of the morning.” – Bestselling author, Teresa Medeiros

Falling for the Marquess – Book 2

Sophia’s sister, Clara Wilson, has come all the way to London to find a respectable husband. But when she attends a scandalous masked ball, she finds herself falling for Seger Wolfe, the most notorious rogue in all of England. “Smart, thrilling, and sizzles with sensuality.” – Bestselling author, Elizabeth Hoyt

In Love with the Viscount – Book 3

Adele Wilson wants to avoid the scandal and drama her sisters have endured in their pursuit of wedded bliss, so she accepts a polite proposal from a perfectly dull British lord. But her plan goes awry when she is abducted on the way to her wedding and cannot resist the lure of her heroic rescuer—who just happens to be her fiancé’s ruggedly handsome cousin. “Spectacular historical romance!” – The Romance Reviews

Julianne MacLean’s classic historical romances are “emotionally powerful” and spilling over with grand passions and adventure from a bygone era. Enjoy her boxed set collection today and embark upon an exhilarating journey of love and desire.