Can This Be Love Collection: The Complete Trilogy 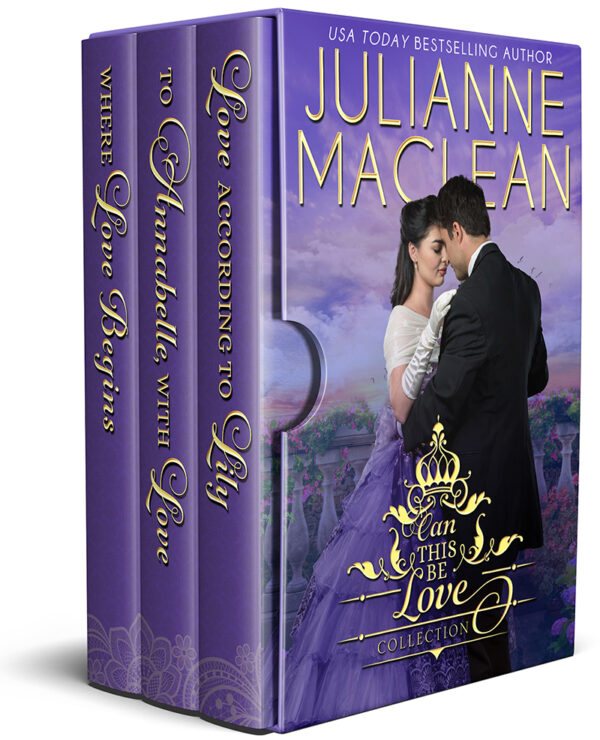 Return to the glittering world of Julianne MacLean’s popular American Heiress Trilogy with this romantic, emotionally charged spin-off series. Enjoy the Can This Be Love Collection today.

Love According to Lily – Book 1

Lady Lily has been in love with her brother’s best friend, the Earl of Whitby, since she was a young girl. Determined to win his heart at last, Lily learns skills of seduction to prove that she is no longer a girl, but a woman. But just when her seduction begins to take hold, a shocking twist of fate changes everything the haunted earl once believed about life, and love. “A very special, powerful read.” – Romantic Times Book Reviews

To Annabelle, With Love – Book 2

Annabelle Lawson meets a dark and handsome stranger on a train and leaps into a romantic summer affair with him—only to be deceived at summer’s end and left heartbroken. Years later, can she forgive the scoundrel who once seduced her, and surrender to the passion that still burns so hotly between them? “Julianne MacLean has once again penned a novel of great worth and utter enjoyment.” – Romance Junkies

Lord Martin Langdon takes pride in his scandalous reputation as a master of seduction. When he sets sail for the Isle of Wight to race his champion yacht during Cowes Week, he finds an even greater challenge in a woman who refuses to fall for his famous charms. Evelyn suspects there is great passion to be had if she could only throw caution to the wind, but dare she risk her heart with an infamous rake who is haunted by a troubled past? “Spectacular historical romance!” – The Romance Reviews

Julianne MacLean’s classic historical romances are “emotionally powerful” and spilling over with grand passions and adventure from a bygone era. Enjoy her boxed set collection today and embark upon an exhilarating journey of love and desire.