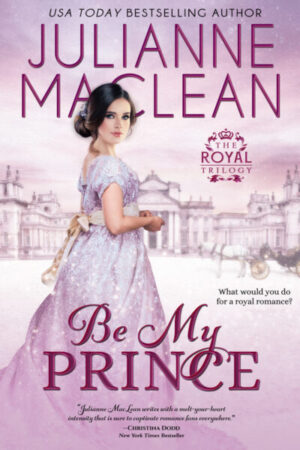 Book #1 in The Royal Trilogy

From USA today bestselling author Julianne MacLean comes a thrilling historical romance trilogy brimming with the lavish romance of the Regency period, and the dangerous passions of royals in love…

Attention one and all. His Royal Highness, Prince Randolph of Petersbourg, will set sail for London in early June and reside at St. James Palace for one full month…Some say the true motive for the prince’s visit to our fair country is to seek and marry his future queen. I will therefore pose the question to our devoted and reflective readers: Who among us will be the chosen one? —From the London Ballroom Society Pages

Lady Alexandra Monroe has more than romance on her mind when she meets handsome Prince Randolph at the Regent’s Ball. While all the other ladies fall for his famous charms, she remains focused on her true goal—to seize the crown of Petersbourg for herself and return her father’s bloodline to the throne. Alexandra is ruthless in her ambitions, until she meets Prince Randolph’s dangerously handsome and seductive younger brother, Nicholas, who arouses her passions in ways she never imagined. Before long, Alexandra finds herself caught up in a complex web of secrets and scandals, where the only hope for her survival is in the arms of the one man she cannot resist…

“There is no doubt that Ms. MacLean’s writing style is a gift from the gods.” – Romance Junkies

“As always, all I have to see is the name Julianne MacLean on a book to make it a ‘must buy’ for me.” – Romance Junkies

NOTE: The original edition of Be My Prince was published by St. Martin’s Press in 2012.

"Nothing gets me to a checkout counter in a local bookstore than one of Julianne MacLean's novels. I know that I cannot go wrong with anything written by her. BE MY PRINCE surpasses my expectations. It is a phenomenal read; one that I just could not put down. I am not normally much for romance novels that focus on royalty, but I will admit that BE MY PRINCE sheds a whole new light on the plotline for me. All I can say is bring me more. I will be waiting patiently for the next book in THE ROYAL TRILOGY series."