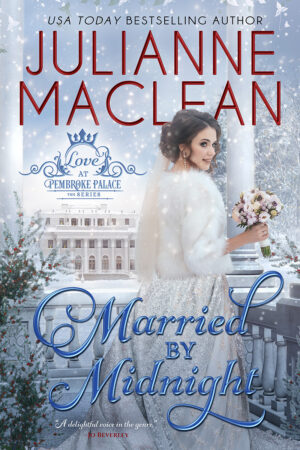 Book #4 in The Pembroke Palace Series

From bestselling author Julianne MacLean comes a grand historical romance series set in the lavish palace of an English duke, where duty and desire collide.

It was a marriage of convenience…until love walked in.

For seven years, Lord Garrett Sinclair–handsome illegitimate son of the Duke of Pembroke–has been traveling abroad with no intention of ever returning home to Pembroke Palace… until his father commands that he must marry by Christmas or lose his inheritance forever. Haunted by a tragic accident that has hardened his heart, Garrett entrusts his brothers to seek out a bride who will agree to a marriage in name only. Her reward? A sizable share of his inheritance–payable immediately after the wedding night.

Lady Anne Douglas has been ruined by scandal and disowned by her father. Facing a life of poverty and spinsterhood, she leaps at the generous terms of the marriage contract to ensure her independence. But the charade of a two-week engagement proves more of a challenge than either anticipated when they cannot resist the intoxicating lure of the marriage bed. Anne knows they will part ways after the wedding. Will she dare risk her heart for two weeks of pleasure in the arms of an irresistible rogue? Or will her surrender become her undoing after a most unexpected turn of events mere hours before the wedding?

“You can always count on Julianne MacLean to deliver ravishing romance that will keep you turning pages until the wee hours of the morning.”—Teresa Medeiros

“A delightful voice in the genre.” Jo Beverley

NOTE: This novel is currently out of print but a new ebook edition is available for pre-order at Amazon, to be released September 17. (See the original 2014 cover at right.) An reissued print edition will also be available September 17, 2020. Learn more. Please sign up for Julianne’s mailing list if you’d like to be informed about the release as more information becomes available.