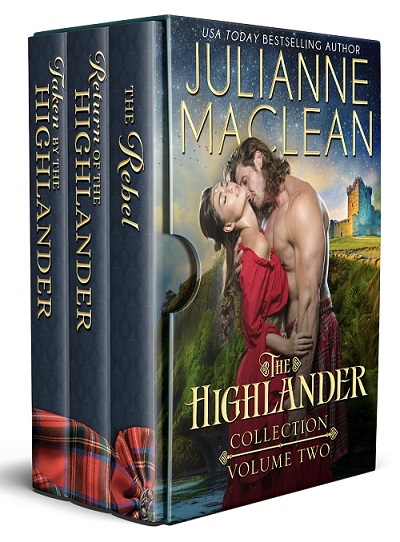 Enjoy Julianne MacLean’s USA Today bestselling Highlander Series in this historical romance boxed set. This collection includes Books 4 & 5, plus a bonus short story to whet your appetite for romance and adventure in the Scottish Highlands.

He is Alexander MacLean, a fearsome Highland warrior fighting for his true Scottish King. She is Elizabeth Curtis, a beautiful Englishwoman who wears the scarlet uniform of an English soldier and wields a sword like a seasoned fighter on the battlefield.
Enemies meet and passions collide…in The Rebel
Note: The Rebel is a short story prequel to the Highlander series, approximately 30 pages in length.

RETURN OF THE HIGHLANDER – the complete novel

A SCOTTISH PRISONER
Nothing means more to Scottish heiress Larena Campbell than saving her father from the gallows. While on an urgent mission to deliver his pardon from the King, she and her English escorts are attacked by a pair of fierce Scottish rebels. When she is dragged unconscious back to the stronghold of Angus the Lion, a powerful and dangerous Scottish laird, she is furious with her captors and determined to escape at any cost…
CAPTOR AND PROTECTOR…
Highland scout, Darach MacDonald, is suspicious of the beautiful and defiant heiress who clocked him in the head during the skirmish with the enemy Redcoats. He suspects she will stop at nothing to win her freedom. When he is assigned the task of shepherding the heiress back to her home, he quickly discovers that spending countless nights on the open road with a lassie as temptingly beautiful as Larena Campbell is enough to drive any hot-blooded Scot mad with savage desire. Suddenly he is overcome by a need to claim her as his own, but when they arrive at her father’s castle, all may not be what it seems…

TAKEN BY THE HIGHLANDER – the complete novel

A WARRIOR WITH A SECRET
Logan MacDonald, fierce warrior and bold scout for Angus the Lion, hides a shameful secret. When he arrives injured at a crofter’s cottage in Campbell territory during a secret mission for his laird, he is immediately suspected of treachery….
A WOMAN WITH A VISION
When Mairi Campbell stumbles across the mysterious wounded Highlander in a moonlit glen—a member of an enemy clan—she is strangely beguiled and cannot resist the desire to unearth the secrets of his darkened soul. Soon, Mairi surrenders to forbidden passion in his bed, which thrusts her into the middle of a war—in a battle for Scottish freedom, and in a battle against the true desires of her heart….