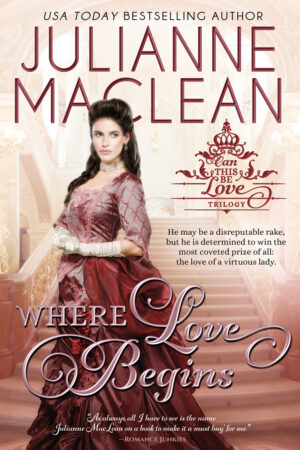 Book #3 in Can This Be Love (American Heiress Spinoff)

Return to the glittering world of Julianne MacLean’s popular American Heiress series with this romantic, emotionally powerful spin-off trilogy—Can This Be Love

Lord Martin Langdon has been deeply wounded by love in the past, so he takes pride in his scandalous reputation where the art of seduction is a most rewarding—and emotionally painless—pastime. When he sets sail for the Isle of Wight to race his champion yacht during Cowes Week, he learns of a particularly beautiful woman who is “impossible to flirt with,” and grows determined to prove that not even the prim and proper Evelyn Wheaton can resist his charms.

Evelyn knows all about the reckless rogue’s shocking reputation and she wants nothing to do with him. She may be looking for a husband, but Lord Martin is certainly not a candidate. The smoldering looks he sends her way, however, are a different matter entirely. She suspects there is great passion to be had if she could throw caution to the wind and surrender to his charms . . . but dare she risk her heart? And will Martin, who hides a most tormented past, be able to surrender to true love at last?

“As always, all I have to see is the name Julianne MacLean on a book to make it a ‘must buy’ for me.” – Romance Junkies

“There is no doubt that Ms. MacLean’s writing style is a gift from the gods.” – Romance Junkies

NOTE: This novel was originally published by Avon under the title Surrender to a Scoundrel in 2007.  (See original Avon cover at right.) It is currently out of print and unavailable as an ebook, but a new author’s preferred edition is coming on September 3, 2020. Learn more. Please sign up for Julianne’s mailing list if you’d like to be informed about the release as more information becomes available.