The Color of Love 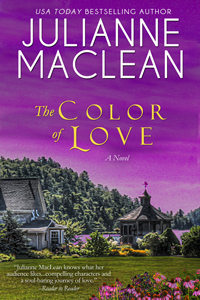 Book #6 in The Color of Heaven Series

USA Today bestselling author Julianne MacLean continues her Color of Heaven series with another fast-paced, emotionally gripping tale that will move and inspire you.

Carla Matthews is a single mother struggling to make ends meet and give her daughter Kaleigh a decent upbringing. When Kaleigh’s absent father Seth—a famous alpine climber who never wanted to be tied down—begs for a second chance at fatherhood, Carla is hesitant because she doesn’t want to pin her hopes on a man who is always seeking another mountain to scale. A man who was never willing to stay put in one place and raise a family.

But when Seth’s plane goes missing after a crash landing in the harsh Canadian wilderness, Carla must wait for news… Is he dead or alive? Will the wreckage ever be found?

One year later, after having given up all hope, Carla receives a phone call that shocks her to her core. A man has been found, half-dead, floating on an iceberg in the North Atlantic, uttering her name. Is this Seth? And is it possible that he will come home to her and Kaleigh at last, and be the man she always dreamed he would be?