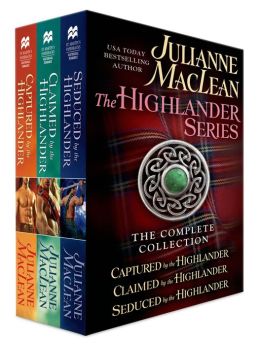 Captured by the Highlander
Lady Amelia Sutherland would rather die than surrender to a man like Duncan MacLean. He is the fiercest warrior of his clan—her people’s sworn enemy—and tonight he is standing over her bed. Eyes blazing, muscles taut, and battle axe gleaming, MacLean has come to kill Amelia’s fiancé. But once he sees the lovely, innocent Amelia, he decides to take her instead…

Claimed by the Highlander
With his tawny mane, battle-hewn brawn, and ferocious roar, Angus “The Lion” MacDonald is the most fearsome warrior Lady Gwendolen has ever seen—and she is his most glorious conquest. Captured in a surprise attack on her father’s castle, Gwendolen is now forced to share her bed with the man who defeated her clan. But, in spite of Angus’s overpowering charms, she refuses to surrender her innocence without a fight…

Seduced by the Highlander
Lady Catherine is a beautiful lass of elite origin—or so she is told. Suffering from amnesia, she is desperate to find the truth about who she really is…or, at the very least, meet someone who inspires an intense memory or emotion. When she first lays eyes on Lachlan MacDonald, Catherine has a sixth sense that he holds the key that will unlock her past—and maybe even her heart. But how could she know that the passion she ignites in this lusty warrior’s heart could consume—and destroy—them both?